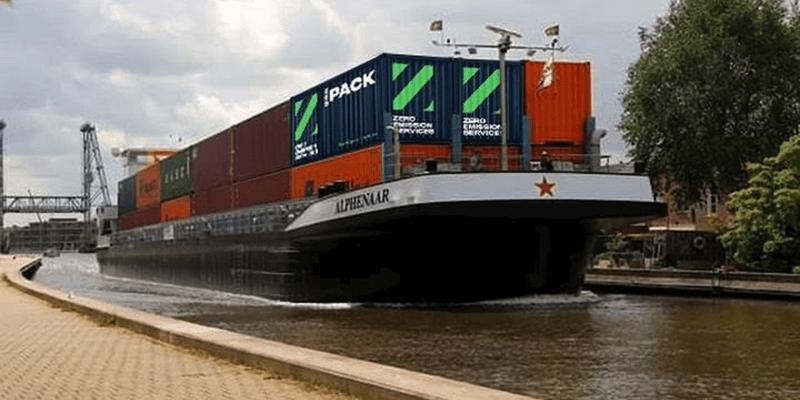 According to ZES, the idea is simple, fill a standard container with batteries and sail under electric power to the next terminal where full batteries are ready to be exchanged. The depleted batteries are then recharged at the terminal and ready for the next swop.

Jorrit Harmsen, sustainable shipping consultant at Dutch technology research organisation TNO, is enthusiastic about the initiative, “This is certainly the first container ship that sails completely electrically. Inland waterway vessels require a large capacity with many batteries. What has been devised now, is a great solution.” It is also particularly suited, he says, to ships that sail fixed routes, meaning exchanging and recharging the battery containers take place at the same fixed places.

In the near term ZES plans to expand its operations to include eight vessels, with 14 ZESpacks and eight loading stations, which can charge two packs in 2.5 hours (which potentially provide back-up storage capacity to stabilise the electricity grid). ZES says the technology is future-proofed in that it could work with other sources of energy, such as hydrogen or ammonia.

Longer term, the company aims to service 30 shipping routes by 2030, and by 2050 plans to have a fleet of 400 vessels in action, swapping up to 650 ZESpacks at 20 docking stations dotted around the country.