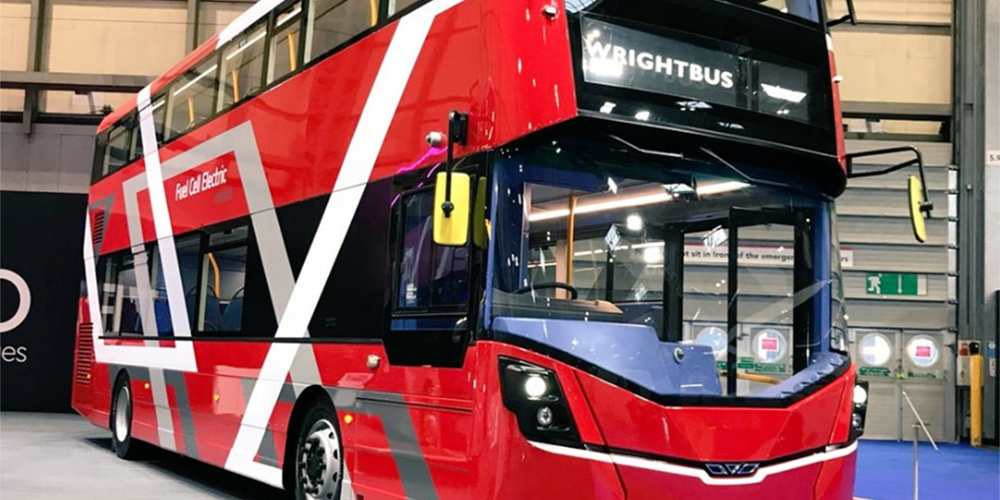 The new London bus fleet is part of a larger push for hydrogen power in public transport across Europe. Transport for London (TfL) has led the UK procurement within the Joint Initiative for Hydrogen Vehicles across Europe (JIVE) to buy in bulk with other UK authorities.

Under the procurement process Wrightbus is the sole supplier of double-deckers for Great Britain. By November there will be a total of 55 hydrogen fuel cell buses across London, Birmingham and Aberdeen.

In total, the JIVE initiative is on track to deploy 139 new fuel cell buses and associated refuelling infrastructure across five European countries. Under JIVE II this will increase to nearly 300 hydrogen-powered buses in the UK, Germany, France, Norway, Sweden, the Netherlands, and Iceland.

“Our investment in these hydrogen buses is not only helping us to clean up London’s air but is supporting jobs and local economies across the UK,” said Mayor of London Sadiq Khan, upon launching the new fuel cell buses.

The buses were manufactured by Wrightbus in Northern Ireland, and the gas cylinders are manufactured by Luxfer in Nottingham. The hydrogen for the buses is produced at Air Liquide’s plant in Runcorn, harnessing waste hydrogen as a by-product from an industrial chlor-alkali plant. Oxford-based Ryze Hydrogen is responsible for transporting the fuel to the fuelling station. A fuelling station built by Danish engineering firm Nel Hydrogen is used to top up each hydrogen fuel cell bus once per day in as little as five minutes.

From 2023, the hydrogen will be produced by electrolysis powered by a direct connection to an offshore windfarm.

Funding came through TfL at around £6 million. More than £5 million of funding has been provided by European bodies such as the Fuel Cells and Hydrogen Joint Undertaking, and the Innovation and Networks Executive Agency (INEA), an executive agency of the European Commission, as well as £1 million from the Office of Zero-Emission Vehicles.

“London may have one of the cleanest bus fleets in Europe, but we need to continue to act now to tackle climate change and the city’s toxic air quality,” said Geoff Hobbs, Interim Director of Buses at TfL.

“Introducing these hydrogen double decker buses to our fleet, alongside electric buses, diversifies our green bus portfolio and helps us use the right technology for the varying operational requirements of our vast network. This will help Londoners breathe cleaner air.”

Transport for London already has more than 500 electric buses in its fleet, and aims to be zero-emission by 2030.