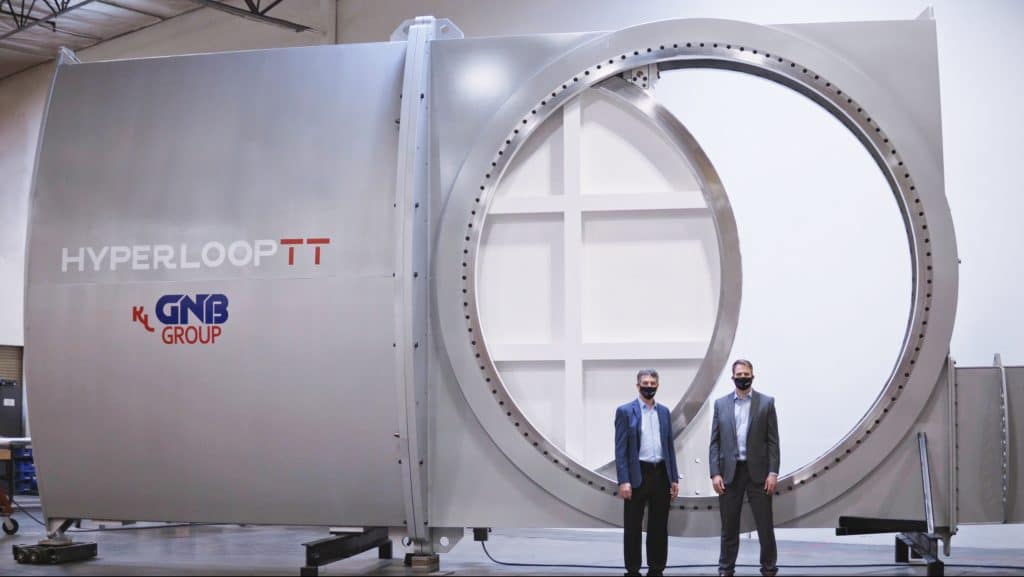 Hyperloop Transportation Technologies (HyperloopTT), the group behind the proposal to propel people and goods through large diameter vacuum tubes at airplane velocities, says development of a new safety isolation valve brings the concept a step closer.

The company has just released details of a full-scale prototype of its 5m diameter safety isolation valve, which it says is a critical safety components for HyperloopTT systems. Built to precise specifications by GNB KL Group in California, the valves will isolate sections of hyperloop system tubes to allow for easier system pressurization for maintenance or emergency.

Ken Harrison, president and CEO of GNB KL Group, said, “It’s one of the largest vacuum valves that has ever been built and one of the really amazing things is the amount of force that this valve can withstand.”

“There are 288,000 pounds of force that are applied to the gate of this valve. That’s about 72 automobiles or one diesel locomotive.”

In most emergency scenarios, capsules will stop at pre-determined emergency stations along the route’s length to exit the capsule and tube infrastructure. As an additional emergency response option, the new isolation valves will isolate sections of the tube creating an emergency escape path within depressurized sections of the loop.

“One of the questions we regularly receive regarding our technology is about safety, especially in emergency scenarios,” said Andres De Leon, CEO of HyperloopTT. “These valves, built to safety certification standards by a world-class leader, are an essential part of hyperloop safety, as they allow us to isolate portions of the track in the event maintenance is needed or in the rare case of an emergency.”

Founded in 2013, HyperloopTT is now a global team of more than 800 engineers, creatives, and technologists in 52 multidisciplinary teams, with 50 corporate and university partners. Headquartered in Los Angeles, CA, and Toulouse, France, HyperloopTT has offices in North and South America, the Middle East, and Europe.