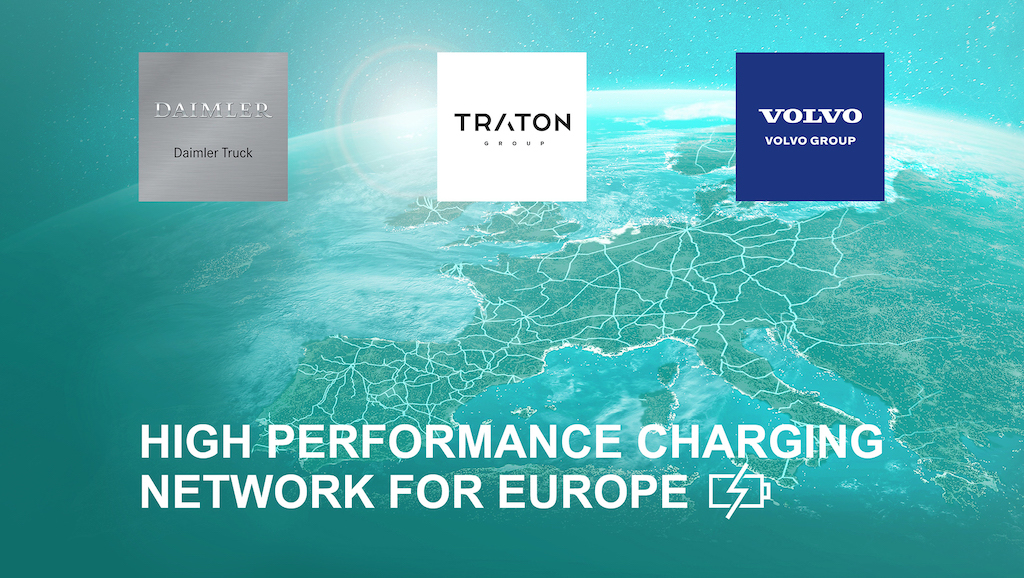 The joint aim is to initiate and accelerate the build-up of charging infrastructure to enhance customer confidence and to support the EU’s transformation to climate-neutral transportation.

The agreement lays the foundation of a joint venture, equally owned by the three parties, which will become operational next year. The parties intend to invest Euro 500 million to install and operate at least 1,700 high-performance charging points close to highways as well as at logistic and destination points, within five years from the establishment of the JV.

The aim over time is to increase significantly the number of charging points by seeking additional partners and public funding. The future JV is planned to operate under its own corporate identity and will be based in Amsterdam, Netherlands.

The future JV will act as catalyst and enabler for realising the European Union’s Green Deal for a carbon-neutral freight transportation by 2050.

Martin Lundstedt, President and CEO Volvo Group says, “We are laying the necessary foundation in making a break-through for our customers to make the transformation to electrification by creating a European charging network leader. We have powerful electromobility technologies, and now, with Daimler Truck, the TRATON GROUP and thanks to the European Green Deal, also an industry-wide understanding as well as a political environment to make fundamental progress towards sustainable transport and infrastructure solutions.”

Martin Daum, CEO Daimler Truck adds, “It is the joint aim of Europe’s truck manufacturers to achieve climate neutrality by 2050. However, it is vital that building up the right infrastructure goes hand in hand with putting CO2-neutral trucks on the road.”

Matthias Gründler, CEO TRATON GROUP: “For the TRATON GROUP, it is clear that the future of transport is electric. This requires the rapid development of publicly accessible charging points, especially for long-distance heavy-duty transport. We are now moving forward together with our partners Daimler Truck and Volvo Group to make this high-performance network a reality as quickly as possible. We now make the first step to accelerate the transition towards sustainable, fossil free transport. The second step should be a strong engagement of the EU for the full scale-up of a charging network across Europe.”

Analysts are calling for up to 15,000 high-performance public and destination charging points no later than 2025, and up to 50,000 high-performance charging points no later than 2030. The JV promises a customer centric approach offering battery electric vehicle fleet operators both fast charging tailored to the 45-minute mandatory rest period in Europe for long-distance transport as well as overnight charging. The network will be open and accessible to all commercial vehicles in Europe, regardless of brand.