Kapsch TrafficCom has announced that the Spanish city of Málaga is the first European city to test the company’s signalling system and real-time traffic optimiser.

The system is based upon variable message signs and Kapsch’s new virtual VMS mobile application, which will indicate the best route to the driver at the moment that they approach a junction or decision point.

The system uses the information from the traffic light system for calculation and decision making to select the most recommended route in every situation.

The trial is a two-year deal, with the possibility of two annual extensions and will build upon tests carried out in other European cities, says Kapsch.

The main objective of the demand-management project is to provide vehicle users with alternative routes which should reduce traffic volumes during peak periods or in the case of unforeseen events.

“The agreement we have signed enables Málaga to be a showcase project for the use of demand and capacity management systems, which we will develop, implement and evaluate as part of a ground-breaking proof of concept in Europe,” said Juan Marín, Kapsch TrafficCom’s city director for Spain and Portugal. 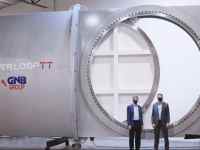