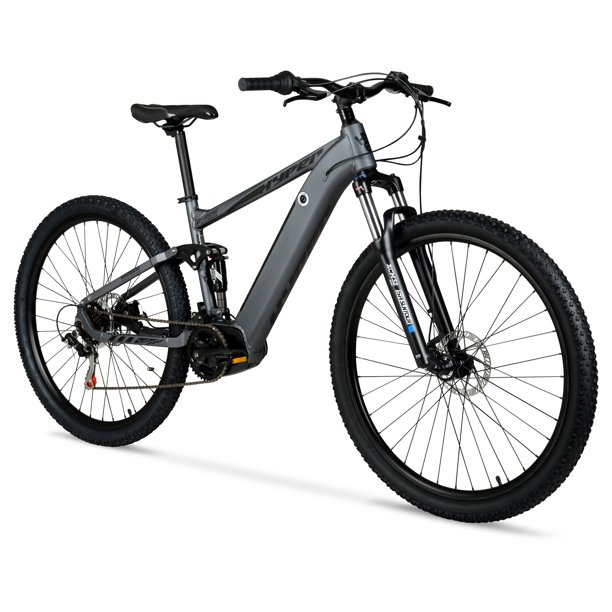 Walmart has provided affordable and easily accessible mobility for decades, and although the options may not be as fancy as you want them to be, they do the job of getting you from A to B. Now the retailer has upped its game with a full suspension electric mountain bike called the Hyper E-Ride.

The bike costs $1,498 which is relatively cheap for a casual e-biker looking for a cheap way to go exploring.

The supermarket claims that the Hyper aims to “support and promote Mountain Biking by producing top quality products for Racers and enthusiasts alike”. Hyper will not be in competitive markets anytime soon, it is great that Walmart has decided to join in on the growing electric mountain bike market with a very affordable option.

Walmart has not given any information of who the motor manufacturer is, and it does not provide any top speed figures either. It does say, however, that the bike is powered by a 36V lithium-ion battery pack that returns a rather lackluster 20miles of range on a single charge. It takes the bike a few hours to charge, but this is a result of the bike being at an affordable price.

Other than that, the Hyper packs an SR Suntour 120mm front fork with a lockout, as well as front and rear disc brakes, albeit non-hydraulic units. A Shimano 1×7 drivetrain comes standard, too. It also has a rear air-shock but doesn’t seem to feature any adjustability whatsoever.

Although the bike will not be able to tackle super technical trails like more established manufacturers, but the bike is a great affordable option that allows people that are not able to splash the cash on tech savvy bikes, to grab an e-bike.