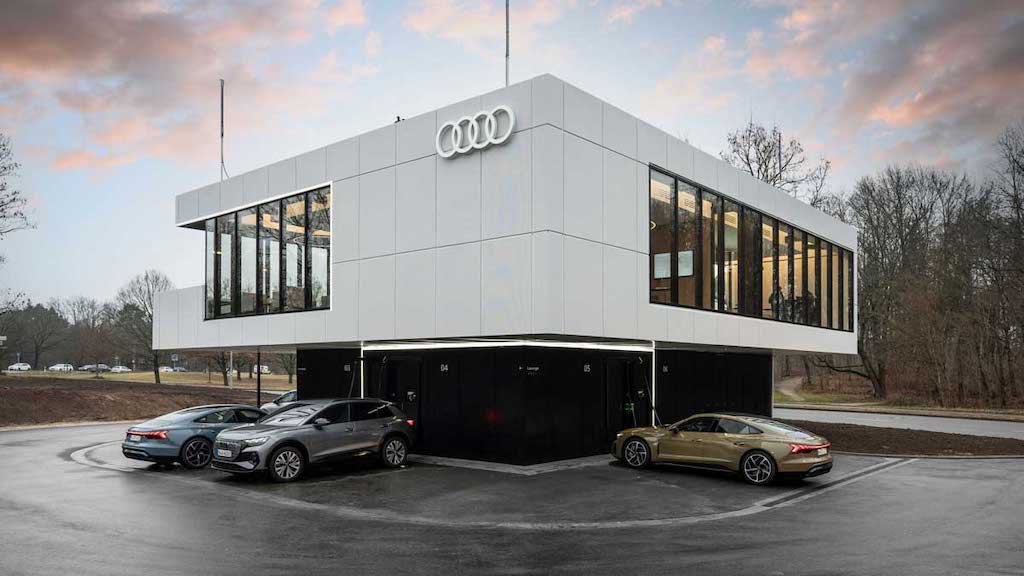 The new facility at an exhibition centre in Nuremberg is built using containers equipped with second-life batteries which can be assembled and disassembled in only a few days.

The Nuremberg cube offers a total of six fast-charging points, each offering up to 320kW of charging power.

Significantly the facility operates using only a 200KW low-voltage power connection, which is sufficient to keep the batteries charged sufficiently to act as a buffer and provide up to 2.45MWh of interim storage.

Roof mounted solar panels provide additional battery top-up power and Audi believes around 80 EVs can be charged daily with the hub’s 200kW supply as the only external power input.

Initially promoted as a design concept, this combination not only provides a use for end-of-life EV bus batteries but also avoids the need for complex infrastructure such as high-voltage power lines and expensive transformers.

Audi says the chargers will provide an e-tron GT with an additional range of 100-kilometres in around 5 minutes, however it’s not necessarily about speed as the facility offers a number of “premium” charging experiences such as a just-in-time delivery service for food, an exchange station for electric bike batteries, an electric scooter lending service, information about various Audi products, as well as test drives in theAudi Q4 e-tron and RS e-tron GT.

“Our customers will share multiple benefits,” said Ralph Hollmig, Audi charging hub project manager. “We want to use it to test flexible and premium-oriented quick-charging infrastructure in urban spaces where our customers don’t necessarily wake up in the morning with a fully charged electric car.”