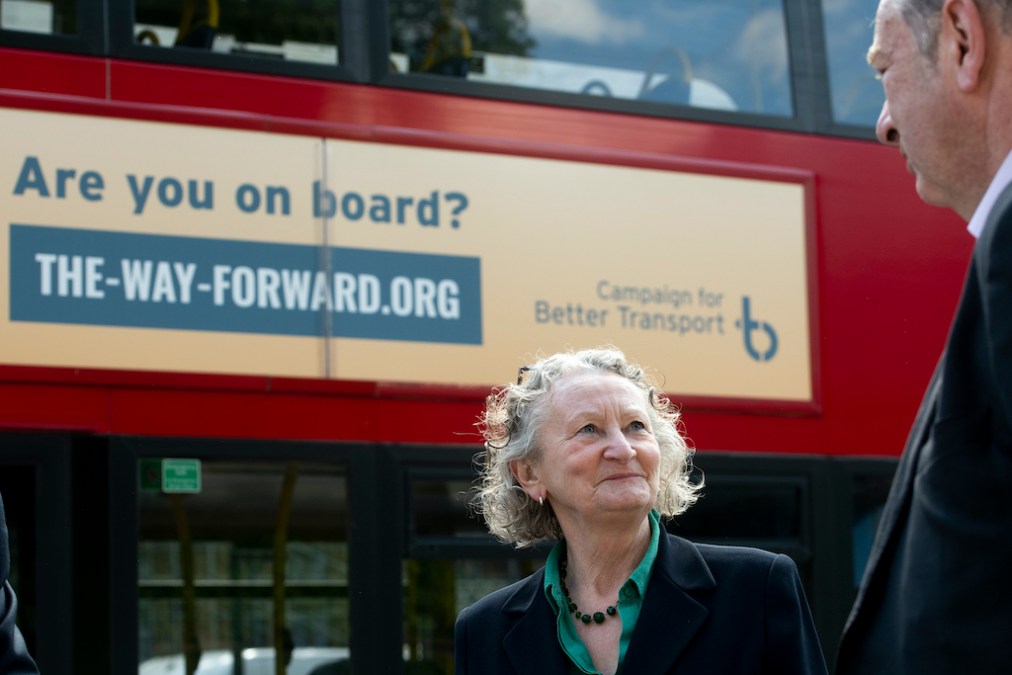 UK sustainable transport charity, Campaign for Better Transport, has launched a national campaign to help get people back on onto public transport.

The Way Forward campaign, launched outside the House of Lords, with support from Green politician Jenny Jones, Baroness Jones of Moulsecoomb (pictured), is calling on the Government to support public transport by actively encouraging people to use buses, trains, coaches and trams as restrictions ease, and introducing an incentive scheme to help boost passenger numbers as part of a national plan to place public transport at the heart of a green recovery.

Paul Tuohy, Chief Executive of Campaign for Better Transport, said, “The events of the last year have made people less confident about using public transport, but as restrictions continue to ease, we all need to start getting back on board. That’s why we’ve launched this campaign to urge the Government to reassure people that public transport is safe again and to introduce a national scheme of discounted fares to encourage people to use it. By getting back on board we can all help to reduce congestion, protect the environment and boost the economy in a way that is fair and sustainable.”

As more workplaces, shops and businesses reopen in the coming months, campaigners argue it will be crucial that people return to public transport to avoid increased congestion and air pollution, and help communities recover. To protect public transport services both now and in the long term, and encourage people back on board, The Way Forward campaign is calling on the Government to:

Place public transport at the heart of a green recovery with a passenger-centred approach to getting people back on board. Public transport needs to evolve to suit new ways of working and living to offer a genuine alternative to the private car. It needs to be easier and simpler to pay for with contactless payments as standard and multi-modal tickets that can be used on buses and trains, and more affordable with flexible tickets that fit new travel patterns

Protect services and renew the public transport system by restoring lost rail links and reconnecting communities to the network.

Tuohy added, “A public transport network shaped around passengers that provides the services people need, at a price they can afford, as we adapt to new ways of working and living is crucial to rebuilding the economy and tackling climate change. By placing public transport at the heart of its transport policy the Government can make sure we all have access to easy, convenient and affordable journeys no matter where we live.”