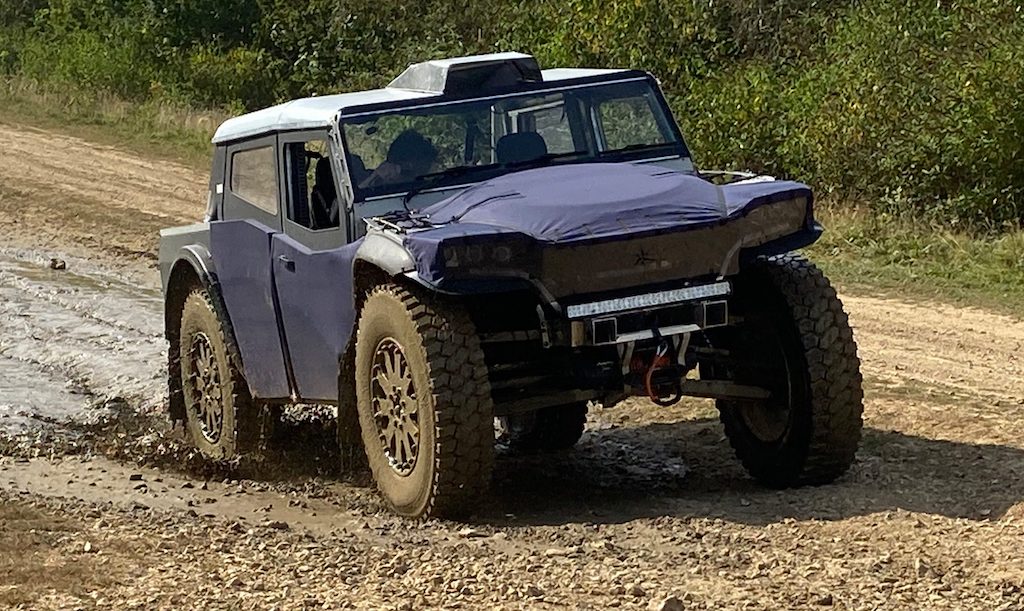 A new British company has launched an electrified adventure vehicle that features a range extender generator that could take its range to beyond 7000km.

The Fering Pioneer is the brainchild of ex Ferrari and McLaren engineer Ben Scott-Geddes, who has repurposed supercar and racing technology to provide environmental responsibility and unrivalled off-grid capabilities for the most extreme environments.

Power to the axles is provided solely by two electric motors – unusual for an off-road vehicle. But they are perfectly suited to the task, providing instant torque, controllability and reliability. They provide a total of 600Nm of torque; more than a comparable diesel 4×4.

A battery provides a zero local emission, electric-only range of around 80km. The Pioneer’s range extender generator is then available to give ability to keep going with range almost unlimited.

The Pioneer’s battery cells are not the same as you’d find in a conventional EV, as the usual Lithium-Ion chemistry is affected significantly by extremes of weather. Instead, Fering have used Lithium Titanate Oxide cells, designed to survive extreme weather conditions.

For longer adventures, the battery is supported by an 800cc 3-cylinder range extender combustion engine powered by biodiesel. By operating consistently at its most efficient level, the engine generates power to run the motors and charge the battery in normal driving. This means the battery can cover peak demands for power – such as hill climbing – using energy reserves which are then replenished while the vehicle is cruising, stationary or braking.

Using advanced materials and techniques has allowed the Pioneer to “rewrite the rules on strength and lightness” too. The dry kerb weight is around 1,500kg – the same as a medium-sized hatchback.

This has been made possible by using an aluminium spaceframe with composite elements, while the exterior panels are made of tough fabric. This material, which is similar to the canvas found in high-end hiking boots, “can shrug off damage, is easily replaced and has better insulation properties than metal skins”.

Despite this, the Pioneer is capable of carrying its own weight as a payload, with a 1,500kg capacity.

The combination of light weight and an efficient powertrain results in exceptional fuel economy. Even with the batteries discharged, the Pioneer is expected to deliver around 50mpg.

The efficiency also means the Pioneer can have an incredible ability to live ‘off-grid’ and survive expeditions to remote areas without having to worry about refuelling. With long-range tanks fitted, the vehicle will be capable of driving for 7,000km without needing a fuel stop or recharging from the grid. If such extreme range isn’t needed for the mission, the tanks can be swapped for water to provide fresh supplies on a mission.

Fering says the vehicle is designed with adaptability in mind and can easily be modified or upgraded to suit the customer’s intended purpose. Bigger batteries, and different range extenders can be used, such as alcohol-fuelled engines in Brazil or a fuel cell in Asia. The combination of a battery and generator also makes the Pioneer ideal for emergency service use, where electrically-operated rescue equipment and lighting can be used in remote locations.

This adaptability means the Pioneer is not expected to have an ‘end of life’ which will require it to be disposed of and recycled. It is easy to repair and upgrade giving it an indefinite life span. Should it ever need to be recycled, there is far less material to recover than a comparable 4×4 vehicle or even a similar sized van.

The first prototype Pioneer is already going through a rigorous testing process and being assessed by early customers and organisations. Series production will start in the UK during the first half of 2022.