The San Diego City Council is planning its first big revision of its Climate Action Plan since it was first adopted in 2015.

“Two hundred-plus actions that we’ll have to work with implementing with departments on securing that path to net-zero.” said Moriah Saldaña, the program manager for San Diego’s CAP

“Basically, we’re looking at all the different sectors for how greenhouse gases are produced,” Saldaña said. “And then we’re finding ways to reduce those emissions.”

The aim of this revision is to make San Diego a more sustainable city and it is expected to be widely adopted by the City Council.

Neighborhood advocates are generally pleased with the extra rigor in the plan, but they say even more could be done.

“We feel like there are some changes that can be made before that final vote,” said Kyle Heiskala of the Environmental Health Coalition. “But, yes, we are supportive of the Climate Action Plan, and I think it’s going to do a lot for the neighborhoods in San Diego in order to address climate change impacts.”

City officials say the CAP is not a finished document. It can be adjusted as the city’s needs and capabilities change. The next scheduled revision is set to happen in 2027. 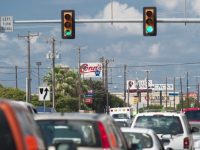